Three new 'team members' have touched down for duty at Auckland Airport - the AeroBot, HydroBot and Duobot - which are hands-free robotic cleaners that perform cleaning tasks such as scrubbing, vacuuming and sweeping without needing hands-on tending by workers. 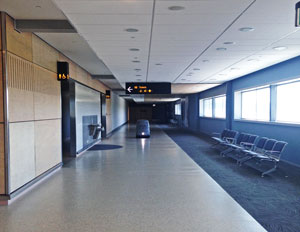 Intellibot in action at an Auckland Airport terminal

Three new ‘team members’ have touched down for duty at Auckland Airport. The AeroBot, HydroBot and Duobot are hands-free robotic cleaners that perform cleaning tasks such as scrubbing, vacuuming and sweeping without needing hands-on tending by workers.

‘The Intellibots use sonar to sense and avoid obstacles along the way, and can be programmed to travel along a planned route,’ reported OCS’ 23 July press release.

The Intellibots were deployed by the sole NZ distributor, OCS Limited, and are the first robotic cleaners to be introduced for commercial cleaning in New Zealand.  Intellibots are manufactured by Intellibot Robotics in the United States and New Zealand is the third country outside the U.S. to receive the new technology.

‘The Intellibots are seen as a sustainable and hygienic choice for OCS in ensuring the company maintains its high level of service to Auckland Airport. OCS acting managing director, Gareth Marriott, says that the introduction of the robotic technology also brings some unique benefits for the airport and its travellers,’ stated OCS.

“Auckland Airport prides itself on its high level of service to travellers, and places a strong emphasis on ensuring that this prestige is maintained – a key element of this is the cleanliness of airport facilities. The introduction of the Intellibot technology means that we can continue to provide our services at a consistently high standard to the airport, while also optimising resources and productivity.

“Another important benefit of the Intellibot technology is that it has a specially designed UV light filter system that eliminates 99.9% of germs from the floors as it cleans, minimising the threat of airborne bugs lodging themselves somewhere,” added Marriott. “This makes it a safer, cleaner and more hygienic environment for travellers.”

Existing OCS employees will also benefit from the new technology being able to take on higher skilled roles such as programming and maintenance of the equipment, while the robots take over the large-scale routine cleaning tasks that typically consume many hours of manual labour.

‘Generally, a typical worker would be able to clean 300 sq m of floor area per hour, the Intellibot is designed to cover three times the area in the same amount of time. On top of this, the Intellibots use up to 85% less water and cleaning solution per eight hour shift.’

Rick Dunn, Intellibot VP of global sales, who helped train staff and ‘settle in’ the Intellibots at the airport, said it had taken 20 years of research and development to get the robots to the point where they could think for themselves.

“OCS first spotted our technology during a field trip to Chicago in 2009. They’ve patiently waited five years for the technology as it was only last year that our Intellibots have been available globally. New Zealand is the third country outside of North America to benefit from the technology, and will have round-the-clock support from our service technicians back home,” he said.

While Auckland Airport is the first off the rank, OCS expects this cleaning phenomenon to grow with more Intellibots touching down soon. ‘And with a newer, smaller model being introduced in late 2015, as well as the aviation environment, the robots would be well suited to hard floors in the education, retail, healthcare, and manufacturing industries,’ OCS noted.