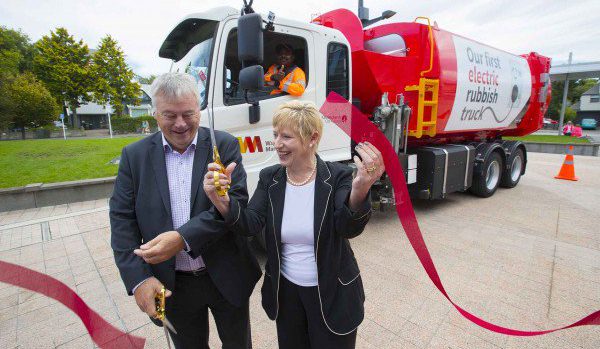 Waste Management is one of NZ’s largest heavy vehicle operators with a fleet of around 800 trucks and 200 light vehicles.

The company announced its move towards a fleet of electric vehicles in September 2016 as part of its Sustainability Commitment, and since then has introduced more than 30 electric cars within its light fleet.

The eco-friendly vehicle launched in this week is the first of its kind in the southern hemisphere, with every function powered by batteries – from the lifting arm to the motor to the computer that the driver uses to know which streets to travel down.

Using a telemetry system, a range of truck functions – including temperature, power consumption and battery status – can be measured remotely.

Driven in part by landfill gas emissions that generate electricity for the national grid begun out the fortnightly red bin collection of general waste across the city this week.

“The council strongly supports a ‘go electric’ approach to its own car fleet,” Trotter said.

“As an organisation, we aim to be carbon neutral by 2030.

“The electric rubbish truck service provided by our contractor, Waste Management, is another big step in the right direction towards our emissions goal following the council’s switch to electric cars.

“The electric truck is also quieter, which will be much appreciated by city residents, particularly during early collections.

“It is also ideal for a predictable stop-start urban route as it recharges itself when it stops and starts to collect the wheelie bins.”

There are plans to introduce more electric trucks into the collection fleet later in the year.

Waste Management announced last year it plans to convert 30 per cent of its light vehicle fleet to electric vehicles (EV) by 2020, as it looks to become a global leader in EV technology.

Speaking at OCS’ national conference in November 2017, Marsha Cadman, national customer first manager, ‎Waste Management NZ, said the company is set to convert just under half of its light vehicle fleet in 2018.

“We’re looking forward to having about 80 [cars] transition and we have about 200 in our light fleet so we’re really well on our way to achieving our goal.”