Waste Management plans to convert 20 of its national truck fleet to electric vehicles in the next two years. 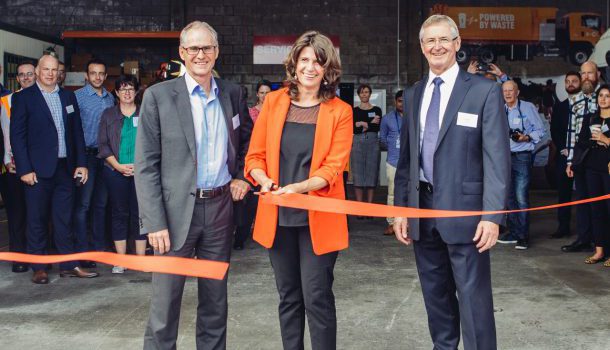 Waste Management is one of NZ’s largest heavy vehicle operators with a fleet of around 800 trucks and 200 light vehicles. The company announced its move towards a fleet of electric vehicles in September 2016 as part of its Sustainability Commitment, and since then has introduced more than 30 electric cars within its light fleet.

Waste Management plans to convert 20 of its national truck fleet to electric vehicles in the next two years. The first conversion is almost completed and the truck will be used to collect waste from Auckland Hospital. In addition, the workshop is also open to other companies looking to transform their vehicles into EVs.

Tom Nickels, Waste Management managing director, said he is delighted to open the workshop in what is a major step forward for both the company and electric vehicles in New Zealand.

“Our investment in the EV workshop will create a knowledge centre for EV conversion in New Zealand and will help us move towards our long term goal of a fleet of fully electric vehicles.

“Our conversion partner EMOSS in the Netherlands has provided the kitsets and knowledge for our team to start completing conversions here in Auckland. We are also looking forward to helping other New Zealand businesses convert their fleets for a more sustainable future.”

The Government’s Low Emission Vehicles Contestable Fund, administered by EECA, contributed $500,000 in 2017 to help build the workshop and convert the first two trucks as part of its commitment to EV development.

Earlier this year in February Waste Management launched the Southern Hemisphere’s first sideloader electric truck for residential wheelie bin waste collections, which has started work on Christchurch streets. Every function of the eco-friendly vehicle powered by batteries – from the lifting arm to the motor to the computer that the driver uses to know which streets to travel down.

Using a telemetry system, a range of truck functions – including temperature, power consumption and battery status – can be measured remotely. Driven in part by landfill gas emissions that generate electricity for the national grid begun out the fortnightly red bin collection of general waste across the city this week.

Another sideloader electric truck will soon be in operation in Auckland. This is in addition to the electric box body truck which started work in Auckland in November 2016. It has also added more than 20 electric cars within its light fleet during this time.

“Our move towards electric vehicles reflects our place in a circular economy, where our vehicles can be ‘powered by waste’. Through our modern, sustainable landfill and energy parks we generate renewable electricity from the gas we capture from the decomposition of waste that we collect,” said Nickels.