Waste Management provides an update on its electric vehicle roll out. 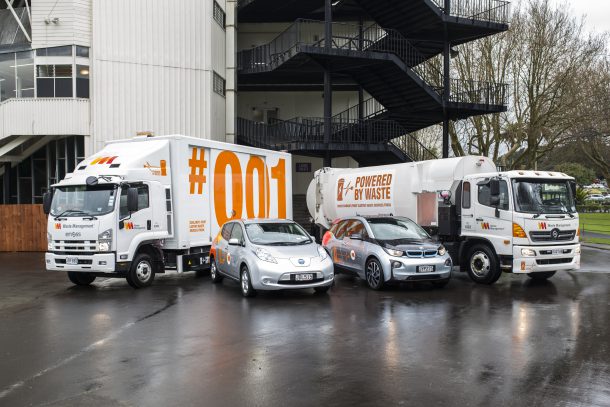 Waste Management has embarked on an ambitious, pioneering programme to reduce its carbon footprint by converting its diesel-powered trucks to electricity. Ruth Nicol spoke to Waste Management managing director Tom Nickels about what’s next for the innovative company.

It’s easy enough to buy an eco-friendly electric car or van off the showroom floor – and many New Zealand companies are doing just that, including cleaning giant OCS and New Zealand’s largest waste collection and recycling company, Waste Management.

They’re among 30 large companies that have agreed that at least 30 per cent of their corporate fleets will be electric vehicles (EVs) by 2019, as part of a landmark, joint private-sector commitment to the future of EVs in New Zealand.

But it’s a bit more of a challenge to make the switch when most of your fleet is made up of large, diesel-powered waste collection trucks and there are no electric alternatives yet available. But that hasn’t stopped Waste Management – which operates 800 trucks and 200 light vehicles – from honouring its commitment to going electric. It’s embarked on an ambitious, pioneering programme to reduce its carbon footprint by converting its diesel-powered trucks to electricity.

“We searched the globe looking for the best partner because you can’t buy suitable trucks off the showroom floor like you can cars,” says Waste Management managing director Tom Nickels. “If we want to begin electrifying our trucking fleet we have to do it ourselves by converting conventional trucks.”

Working in partnership with Dutch company EMOSS, Waste Management has now completed the first phase of a pilot programme to convert five different kinds of trucks – including a box body truck, two side loaders, a skip bin truck and a rear loader – to electricity. Three are already on the road in Auckland and Christchurch and another two are expected to arrive in the country from Holland in May.

The vehicles are the first of their kind in the southern hemisphere, with every function powered by batteries – from the lifting arms to the motor to the computers that the driver uses to know which streets to travel down.

Now the company is about to embark on phase two of the project – building a warehouse in Auckland to convert another 20 trucks to electricity using kitsets from EMOSS.

“That should keep us busy for the next 18 months,” says Nickels.

He says making the switch to EVs makes sense for his company, which has sustainability at its at its core.

“Our purpose, the reason for our existence and for the services we offer, is all about sustainability. It’s what we do.”

The fact that the company already generates renewable electricity using waste at its landfills is an even more compelling reason to switch its fleet to electricity.

“We’re harnessing the energy component of people’s waste and putting it to good use. We’re the largest generator of renewable energy in Auckland and we believe we should be able to power our entire fleet with our own electricity.”

And while range can be an issue for EVs – they can travel an average of about 180km on a single charge – range is not an issue for Waste Management’s trucks because they travel relatively short distances on very specific and well-defined routes.

“We know precisely within five kilometers how far a truck is going to go, so we can design the route to make sure the range is covered.”

Even the stop-start nature of the average rubbish-collection route is a bonus because, unlike a diesel-powered truck, it provides an opportunity to use a process called regenerative braking to boost the amount of energy in the truck’s batteries.

And as the lucky drivers of the converted trucks are finding, electric trucks are not only much quieter than their diesel-powered counterparts, they’re also very enjoyable to drive.

“We’ve had great difficulty getting drivers out of the pilot trucks. They accelerate very quickly and they also go up hills with ease, particularly when they have a load on board.”

As well as converting diesel trucks to electricity, the company is also committed to gradually replacing most of its 200-strong light-vehicle fleet to EVs. However it plans to retain some petrol and diesel powered vehicles and trucks.

“We’ll convert a large majority of the fleet but there are some applications that aren’t suited to electricity.”

And while it’s having to take a DIY approach to converting the trucks at present, Nickels expects that to change.

“They’ve already started making trucks in China, and European manufacturers such as Mercedes have said they are working on developing them, so they will eventually come onto the market.”

In the meantime, Waste Management’s conversion programme is drawing a lot of attention from throughout Australasia, and its Auckland workshop could potentially allow other companies to switch their trucks to electricity without having to send trucks overseas.

As to the future of EVs, Nickels has no doubt that they’re here to stay.