INCLEAN NZ speaks to India Korner about her company’s mission to improve workplace recycling habits through a new design of rubbish bins. 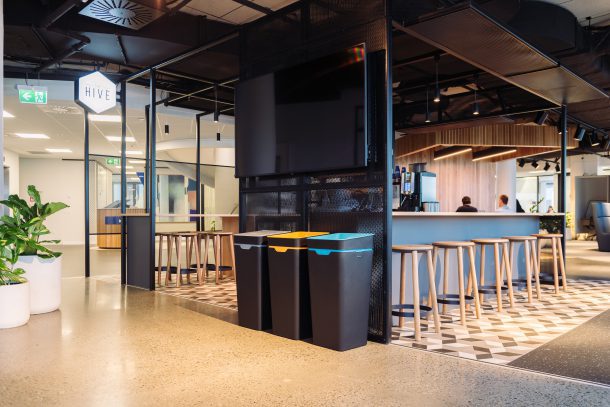 Through their commitment to environmental awareness, the couple soon discovered a gap in the market they knew they could fill.

“During our travels we continued to see beautiful office spaces virtually littered with ugly bins,” explained Method co-founder India Korner. “It was quite detracting from what the architects and designers of the building were clearly trying to create in these spaces.”

Inspired to create an attractive and accessible recycling solution that people would want to use, India and Steven spent three years researching and analysing office trends, mapping out waste streams in businesses and even helping commercial cleaners on night shifts to further understand waste disposal processes.

In January 2015, the first Method 60 litre recycling bin, which sold out in pre-production, was launched to the NZ market. After seven months of operation in NZ, Method made its first international sale to software company Atlassian in Australia.

In August 2016, Method introduced its product line to Hong Kong and Singapore and opened its second office in Auckland, NZ. Two years later in 2017, Method opened its third office in Sydney and forth office in Melbourne. According to the couple, Method’s main target audience are open plan spaces, including office buildings, universities and airports.

In Australia it currently supplies recycling bins to venues such as Sydney Cricket Ground and Melbourne University, while some its NZ clients include Westpac and Wellington Airport. The start-up has also already made sales to the US and is currently progressing into the UK market.

“We currently have an agent selling our products in the UK, and have just employed a full time UK salesperson,” said Korner.

During the three years since its launch, Method has designed and added more products to its line, including desktop recycling accessories. It currently offers 60 litre office recycling bins, compostable, black and clear bin liners and individual desk bins called precyclers.

“The recycling accessories are for companies that are transitioning from all workers having a desk bin to just the one Method bin in the office,” explained Korner. “Some workers find it hard when the desk bins are taken away, so we introduced what we call ‘precyclers’ which replace individual desk bins and provide short term desktop storage. Users simply put their rubbish in the precycler and empty it in the bin at the end of the day or on their lunch break.”

In May this year, Method launched its new website which features an online shop for smaller customers who prefer to self-serve.

“Our website definitely needed a refresh,” said Korner. “My husband and I started the business together so initially we did everything, including creating the website. But we really needed the website to be as beautiful as our products, so we spent a lot of time creating instructional videos for the website to make it easier for customers to navigate around.”

This year the company also released a HD (heavy-duty) connector for Method’s recycling stations in large facilities and high-flow environments.

Focusing on the design of the recycling bins is what sets Method apart from its competitors, according to Korner.

“People spend hundreds of thousands of dollars on creating office spaces that are meant to be a pleasant and healthy place for staff to work, so we feel like products like office bins should be well designed to fit into that environment.

“We want our bins to be displayed throughout the workspace, not hidden away. If it’s not a good looking or accessible product, companies won’t want to have it around desk areas.

“We considered small things in the design process. For example, we decided not to put any sharp corners on the bins so they are very easy to keep clean and the angles of the lid mean you can’t see the contents of the bin from afar. Usually with a bin you can see a bin liner hanging out around the edge like an untucked shirt, but the way the bin liners fit into our bins mean its quick for the cleaners to change and the bin liners are hidden from view.”

Everyone recycles at home, but no one really does it at work. We’re a piece in the puzzle that is helping make workplace recycling simpler for businesses.”

This first appeared in the August issue of INCLEAN NZ.