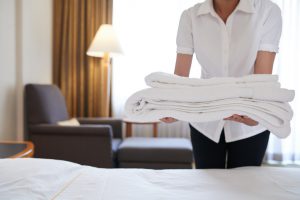 Six international students working as housekeepers at the Grand Mercure in Wellington have accused their employer AHS Hospitality of exploitative behaviour.

The students, who travelled from India to New Zealand on six-month fixed term contracts as part of the placement requirements for their hospitality degrees, claim they were underpaid, overworked and if they complained, were threatened with deportation.

New Zealand publication Newshub reported the students and other workers claimed they were instructed to alter their time sheets and write earlier finish times so some of their hours were not paid.

Unite Union national secretary Gerard Hehir told INCLEAN NZ the young migrant workers had paid between $6000-$8,000 each to be placed in jobs at hotels in New Zealand.

“They were employed to undertake cleaning of rooms and general areas but told us that they had been bullied and threatened with deportation on multiple occasions; did not receive any paid breaks; were not paid for all the hours they worked and had been instructed to falsify their timesheets,” he said.

“The students had also been racially abused, forced to come to work when sick and forced to work seven days a week, week after week.”

Unite Union was also provided with a recording of the owner of Internship New Zealand talking to her bullying, abusing and threatening one of the workers.

“It became clear that she was working closely with a manager at AHS Hospitality (which has a contract with ACCOR hotels for cleaning) and both of them had repeatedly bullied and threatened these workers,” said Hehir.

“We investigated further and found that the workers had complained to senior managers and HR staff but little or no action had been taken.”

An AHS spokesperson told INCLEAN NZ that AHS has “taken urgent remedial steps to address immediate concerns regarding discrepancies in relation to entitlements.”

“In the past week, we have held welfare check meetings with each of our staff, in the presence of Unite Union representatives,” the spokesperson said.

“We have reiterated to our people that they will be supported to speak out about their concerns and have engaged an independent specialist to conduct the investigation into the issues raised by these members of our staff, to ensure that it is robust and fair to all parties.”

AHS said that although the investigation is ongoing, it has revealed unacceptable behaviour by third parties which are unacceptable, inappropriate and not consistent with AHS’s values.

AHS has arranged to meet with Unite Union to discuss the staff grievances and to reach a resolution to ensure its staff work in an environment that is safe, fair and enjoyable.

“We are concerned that our staff did not feel able to raise these concerns directly with us and we appreciate the work of the Unite Union to ensure these concerns are investigated and that any issues are dealt with to ensure our people are being treated, not just as New Zealand employment law requires, but in the way that we expect as a company.

“Once we have the report from the inquiry we will be looking at any additional measures we need to put in place to avoid any repeat of these type of issues.”

While some of the issues may have been the fault of a single manager, they should not have gone on for so long and indications of problems should have been investigated much earlier, according to Hehir.

He told INCLEAN NZ that discussions with AHS were continuing but there are a number of enforcement options the union will pursue if an agreement cannot be reached.

“Detailed complaints have been put to AHS and we have had a lengthy meeting with them to resolve both the specific individual issues and the hotel’s processes in the future to make sure this behaviour does not repeat,” he said.

“There have been a number of cases recently where large companies have employed contractors whose treatment of migrant employees has been deficient, both in terms of pay and conditions. It should now be clear to companies that they cannot wash their hands of how contractor employees are treated, especially if they are physically working in their premises and alongside their own employees.”

“The threats of being deported are real and are used by employers to prevent workers complaining about unfair treatment or accessing basic employment and human rights,” he said.

“As a country we have allowed the creation of second-class citizens. It has to stop.”

Building Service Contractors NZ (BSCNZ) CEO Sarah McBride has labelled the accusations as “disturbing” but a valuable lesson for the wider business community to be more aware of the implications in contracting a company that is blatantly abusing the rights of their staff.

“This story provides a valuable lesson to the wider business community to be more aware of these issues within our industry and understand the implications to their business in contracting a cleaning company that is blatantly abusing the rights of their staff,” she said.

“Our industry is one of the most labour intensive in New Zealand, and should be founded upon excellent HR practices.”

Accor Hotel group, owner of Grand Mercure, said it prides itself on treating employees fairly and with respect and is also investigating.