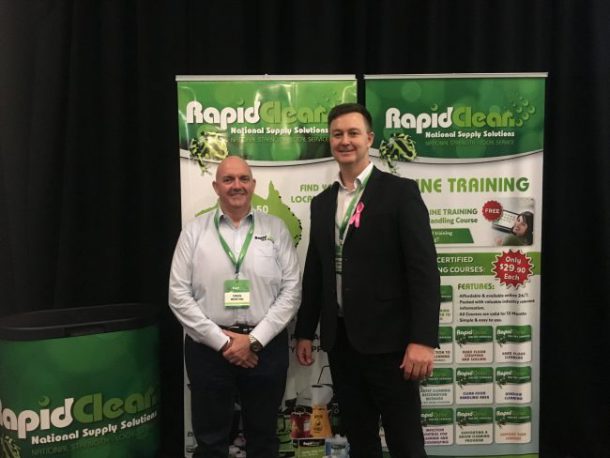 Rapid Group has appointed Craig Newton as country manager of New Zealand, as the co-operative’s expansion continues to gather pace.

Based in Wellington, Newton has previously held senior sales and management roles in Asia, Australia and NZ with Nilfisk, Godfreys, Royal Touch Paper Products and most recently, Central Cleaning Supplies.

Newton told INCLEAN NZ at RapidClean’s conference in Auckland last week, he is confident the Rapid business model under New Zealand ownership and management will be successful.

“Even in the short tenure of one year, the NZ members are already very committed to the brand. The focus for me is to bring the supply channel and membership together.”

New NZ members were announced in July this year – Pack Centre NZ in Plymouth and CleantechNZ in Papamoa. In Australia, the Rapid Group has more than 55 members, with its footprint a mixture of RapidClean branded sites and independently-operated sites. RapidClean members in NZ remain fully owned NZ businesses.

“The Rapid Group has been so successful in Australia because the business structure and marketing of the brand is really cemented. I want to replicate that here and I believe once we do we can grow quite quickly,” Newton said.

According to Newton, Auckland, Wellington and Central North Island will be target areas for new sites to help solidify the brand, adding the company is aiming to add as many as four members over the next 12 months, taking the total number to 15.

Bruce Lees, general manager of the Rapid Group, announced at the company’s annual conference the group had reported a record year, achieving 18.5 per cent year on year growth.

“Rapid Group has had the most successful year in the history of the group, not just financially but at almost every level,” Lees said.

Over the past 12 months Rapid added three members in Australia and 11 members in New Zealand. Other highlights for the group in 2017 included the redesign of Rapid’s private label and paper products, as well as the launch of a guest amenities range.

At last year’s conference in South Australia, Lees outlined Rapid’s five-year plan, with the main goal to more than double turnover and purchases from preferred suppliers by 2022.

“After one year of the plan we’re ahead of schedule. Our vision is to be Australia and New Zealand’s dominant supply group embracing innovation, product knowledge and customer service,” he said.

The 2019 Rapid Group conference will be held in Sydney.