Learn what drones have to offer your restoration company with an inside look at this rising industry technology. 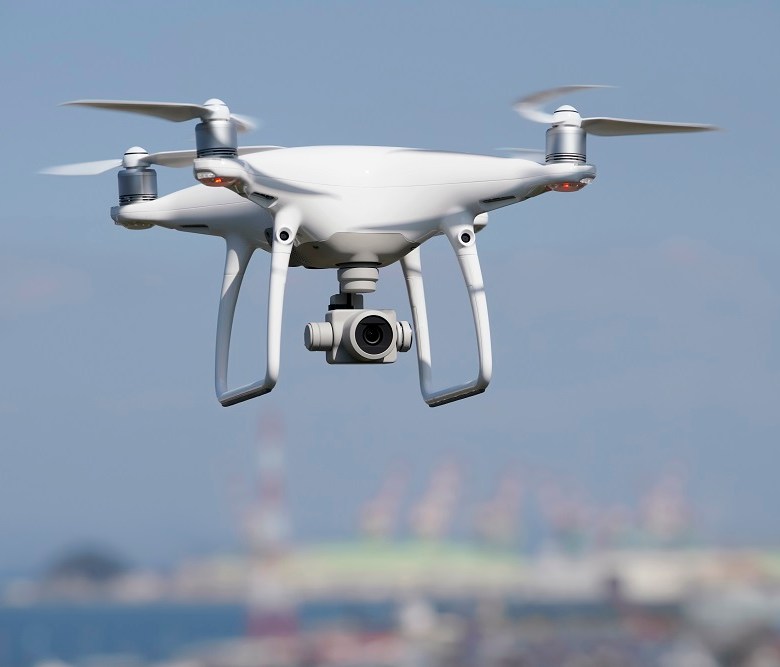 We are all familiar with drones. The small ones are fun to fly around your house and spy on neighbours.

The large ones are used in warfare, surveying enemy territory and taking out bad guys. But in there is a middle ground that holds a wealth of benefits for restoration companies that work on large sites, es­pecially commercial buildings.

We aren’t talking about the little quadcopters you can buy for $100, but rather “commercial” drones that are larger and smarter – and will cost a good bit more, obvi­ously.

The term “commercial” here comes from the Federal Aviation Administration (FAA), who defines any drone that is used for financial bene­fit as a commercial drone.

You’ll also see terms like unmanned aerial vehi­cle, which is the drone itself, and un­manned aerial system (UAS), which is a more all-inclusive term for every­thing involved in flying a drone, in­cluding the pilot and ground station.

These types of drones collect data in hard-to-reach places faster than a technician could, while keeping them safe. They can also carry sensors (like thermal imaging, 3D mapping, and measurement) that provide data needed for beginning, maintaining, and documenting a project.

While these devices aren’t for every restoration company, they do provide significant benefits to certain kinds of companies. And they are becoming increasingly popular in the industry.

One of the most obvious but import­ant benefits of drone use on resto­ration job sites is the added safety it provides to the technicians on the ground surveying damage.

Protecting your workers is obviously key in any job, but especially in fields like res­toration where dangerous situations are more prevalent.

Randy Rapp, associate professor of construction management at Pur­due University, considers the extra protection for workers one of the big­gest advantages of drones.

“They can go places more quickly than people might using a ladder or something of that sort. To get to higher levels in, say a gymnasium or warehouse, with a drone, if you’re operating using the right sensor, you need not climb any­thing,” Rapp says.

“It can be up there very quickly. It’ll have people seeing at higher levels and in places where an elevating device would not allow people to readily go right in.”

With this added safety also comes another major benefit: speed. By re­moving the physical requirements from surveying damage onsite, restor­ers can gather information more quickly so job planning can begin.

He reports his company, in partnership with Drone­tec, mapped 300 buildings in 10 days after Hurricane Irma, which would have taken months without drone technology.

Millin explains, “Drone mapping makes it easy to collabo­rate and minimises insurance risk. Each map is geotagged and has a clear record of the date, time, and lo­cation so that an insurer is confident that they are paying the right claim.”

Rapp adds the sensors on some drones speed data collection even more and often gather information of higher quality than might otherwise be achieved, which aids a restorer’s planning, allowing the entire job to begin more quickly and accurately.

The added speed and accuracy of data collection offers an obvious benefit to restorers since restorer-insurance rela­tions remain one of the most discussed issues in the industry. With require­ments for documentation growing increasingly stringent, the restoration industry seems always to be searching for ways to ease the burdens.

“The key benefit here is the ability for fast, accurate documentation of damage, which then leads to quicker cycle times to have claims settled…With the right software, these systems/technologies could also provide roof measurements and other data analysis to assist in the review of data (i.e au­tomated damage detection using arti­ficial intelligence),” Kevin Wunder, vice president of marketing and product for Loveland Innovations, says.

“We are seeing more and more insurance carriers both using drones themselves and accepting drone data as part of the claims settlement process.”

According to Wunder, insurance carriers’ teams are using data from drones to settle claims, while resto­ration contractors are submitting data captured with their drones to homeowners’ adjusters.

He says, “In both scenarios, the inspectors are looking to drones to provide high-resolution data that can lead to accurate and fair claims settlements. And they’re looking for it to occur in a rapid and safe manner.”

Important to data collection in restoration scenarios is the sensors drones carry. There are several sensors being added to drones to pro­vide the data needed for advancing a restoration job, and there is really something for every situation.

Rapp says, “There are a lot of differ­ent sensors. What you add depends on what you’re looking for. It might be ul­traviolet or infrared. You can have one for low-light situations. There’s LIDAR, laser, and even AM radio waves.”

Here are a few that are being used with success in the industry:

Light detection and ranging (LIDAR) provides a collection of impressive tools including 3D mapping and mea­surement. It does this by sending out light pulses and measuring using the time it takes for the light to return.

“It’s able to plot in great detail the surfaces of things inside a room, let’s say. And that is helpful in a number of ways,” says Rapp.

“For example, once a week, at a given time, they might send out the drone, and it can see the amount of work that has been done in the past week. They can tell one week versus the next week and show the difference that’s been made.”

The ability to fly drones carrying ther­mal imaging sensors into large-scale restoration sites and see areas with potential moisture is beneficial for ob­vious reasons. As Millin puts it, “This is one of the most expensive issues to detect and is a huge value driver for commercial building insurance.”

While these sensors are not wide­spread yet, they are becoming popular. However, it’s important to remember use of thermal imaging with drones still requires the same training knowhow needed with a hand-held device.

“Unless someone is leveraging a thermal camera, most drone inspec­tions are done in the visual spectrum. Thermal inspections are growing but remain a smaller percentage of inspec­tions performed with drones,” Wunder notes.

“This is mostly due to the skill and expertise involved and the ex­pense of an appropriate setup for aeri­al thermal inspections.”

These can be used to create maps of an area by sewing together many im­ages. Orthomosaic maps are detailed with the ability to zoom and examine, things.

Drawbacks of drone use

For the most part, adding a drone to your restoration toolbox has few drawbacks – since they’re relatively affordable, require little training, and offer a host of benefits – if you’re the right target market.

Commercial drones, simply put, are not for every company or situation. It is important to understand where and in what cases drones are best used. Instances where there needs to be a visual examination and documen­tation of damage done in a rapid way is a prime scenario for drone use.

For those considering buying a commercial drone, it’s important to consider the scale of company opera­tions. How much would you use it? Are you doing the right types of jobs for it? Even if you might benefit from drone use, subcontracting drone inspections might be more cost effective.

Rapp explains, “If you’ve primari­ly got your restorers taking care of a home after toilets overflow, you hard­ly need a drone. However, if you’re go­ing into a gymnasium or a warehouse, to be able to fly a drone around both outside and inside might be very helpful. You can put it over the build­ing, and with a thermal-type detector, you can potentially see where there are differences in temperature, which might be indicative of water damage.”

While drones are not outrageously expensive, especially compared to some of the equipment required in restoration work, they also are not especially cheap.

On the low end, a commercial-quality drone with el­ements needed in restoration work could go as low as $US1000, and on the high end, prices reach up to $US10,000 (or more, depending on additions). And different sensors can be added, increasing the cost.

“They’re not extremely cheap to get one that provides that kind of infor­mation that restores would expect and would make them worth having in the first place—we’d be looking at proba­bly a few thousand dollars at least to have the kind of sensors needed, the capability, enough battery life to be able to fly for 20 minutes at least be­fore bringing it back,” Rapp says.

Rapp adds, “That has come down a bit in price, but you’re going to spend near that kind of money to get a drone that you would find useful, maybe with an extra battery, sensors, etc.”

Drones are everywhere in recreation­al, government, and commercial use. More and more companies in a mul­titude of industries are finding uses for drones that revolutionise work. And the time is now for restoration companies who perform large-scale jobs to add drones to their arsenal.

“There are many industries and companies using drones in everyday operations, so one could argue it’s al­ready becoming commonplace. We’re currently seeing prolific drone use by restoration NGOs,” Millin says.

“We’re rapidly reaching the point in most of the world where you’re more likely to see a drone involved…than not.”

Much of the insurance industry has implemented drones into their in­spection process with success. Wun­der reports national and regional insurance carriers are using drones, and his company alone has major insurance company names using its drones in inspections.

“I think [drones in restoration] is growing to become more common­place today, but we’re not at a place where it is the norm. There is still a great amount of adoption required for it to become the norm, but within the next 2-3 years I believe you’ll see drones being used more often than not,” Wunder says.

As advancements are made to drones and sensors, we can expect to see them in the air on larger res­toration sites. A few specific improve­ments the experts see contributing to their popularity in restoration are:

Battery life can be a problem on these medium-sized drones, and a 20-min­ute battery life is currently superior. As technology improves, extended battery life is expected. Rapp says, “Be­ing able to raise a drone up and leave it up for a long time without bringing it back to have a battery recharged or exchanged is very important.”

The sensors that exist relevant to the restoration industry are highly ben­eficial to the work, but they can be heavy and often expensive. With the advancement of technology, those burdens should lighten.

As with most things in our world these days, drone technology is mov­ing toward more automated func­tions.

Wunder reports in the near fu­ture, “Using drones will be so simple that they will be in the hands of nearly anyone performing [inspections]. Ro­bust automated capabilities exist to­day, and they are only getting better. As constituent technologies improve, like improved onboard sensors and more precise location tracking, you’ll see drone flight become more and more simple.”

As more and more restoration com­panies use drones in their work, we will be able to better see their value and other ways to use them on a job­ site. And as their use in the industry grows, we will, no doubt, begin to see more advancements in sensors that relate directly to restoration work, increasing their value even more

Amanda Hosey is the man­aging editor of Cleanfax. She has worked as an editor and writer for more than six years, including four years with Cleanfax. Reach her at amandah@issa.com.

This article first appeared in Cleanfax and has been republished with permission.