AMC Commercial Cleaning opened its doors in 1998 and since then its CEO Stephen Coade has expanded the business into every state of Australia through a franchising model. The next obvious step was to jump across the ocean to our New Zealand neighbours. 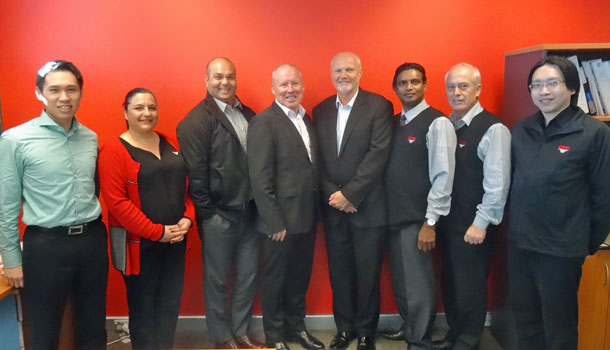 AMC Commercial Cleaning opened its doors in 1998 and since then its CEO Stephen Coade has expanded the business into every state of Australia through a franchising model. The next obvious step was to jump across the ocean to our New Zealand neighbours.  With a new office, a new general manager and some persistent hard work, Coade is confident that the Auckland branch will be just as successful. He speaks with INCLEAN’s editor, Kim Taranto, about the company’s growth.

Coade started AMC 27 years ago by knocking on doors. “I’m a salesperson, that’s what I do. I knocked on doors and picked up contracts the old fashioned way. And I started to build a traditional cleaning business,” he shared. “The business started out employee-based, but the trouble was that I was working from no capital and when I landed a contract, I had to stop door knocking and fund the work. This is a very repetitive and slow process so, in the mid-90s, I decided to look at a franchising model.”

This decision allowed AMC to become self-funded and for the company to move interstate, which has resulted in AMC being in every capital city around Australia.

Now AMC has taken the leap across the waters into Auckland, New Zealand, with 200 square metres of office space and a general manager with a background in cleaning to start in August. “We dabbled in China for six years with two and a half employees in Beijing, but it wasn’t giving us the returns and turned out to be more difficult than what it was worth, so we terminated that contract,” explained Coade. “So we looked to other overseas markets and New Zealand was an obvious extension to what we do.

“We’ll start the traditional way by knocking on doors, making phone calls, giving quotes and supplying a great service and our clientele will grow,” added Coade. “Our formula works; it’s successful. And we know we can achieve that same success over there.”

While there are challenges in every aspect of business, Coade isn’t concerned about the obvious mission ahead of him to find the right cleaners to work for AMC in New Zealand. “It’s difficult to find good workers anywhere,” he claimed. “When someone asks me how I select my cleaners, my answer is simple; if they can walk, I’ll give them a job. What AMC does is we manage the process of cleaning, we’re a management company and cleaning happens to be our product.”

Coade offers some of AMC’s small national contracts as examples; “we have to find good cleaners in places such as Newman or Broome in Western Australia; we have two jobs on Hamilton Island, and anywhere from Devonport in Tasmania to Emerald in Queensland – we have to find people everywhere to fill these roles,” he lists. “We have people on the phone trying to find good cleaners for places in the middle of nowhere. We talk to the locals and make connections. And New Zealand will be no different. We will find the good workers.

Coade admits he’s very excited about the prospects of AMC’s move into Auckland. “It’s a vibrant city and although it’s only a small population at around one and a half million people, they have great infrastructure and the city is bigger than you expect for a city of that size,” he revealed. “It’s a friendly, helpful city and very different to our dealings with people in the likes of Sydney and Melbourne. It’s a lot more laid back and I hope there’s not too much resistance to the Aussies coming across the ditch.”

To read the entire article, get the August issue of INCLEAN New Zealand.