Manager Nathan de Clifford chats with INCLEAN NZ about the family-owned company’s pathway to growth including its recent partnership with the Rapid Group. 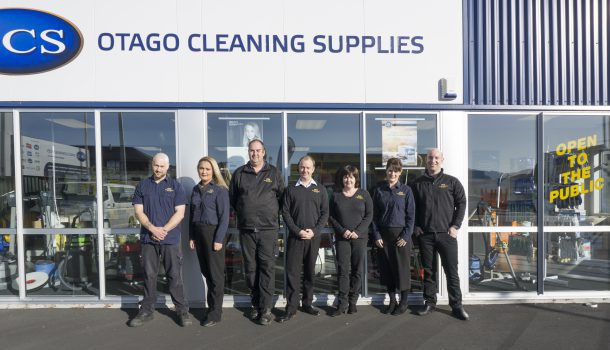 Four years on from moving into a purpose-built facility in Dunedin, Otago Cleaning Supplies has continued to raise its profile. Manager Nathan de Clifford chatted with INCLEAN NZ assistant editor Lizzie Hunter about the family-owned company’s pathway to growth including its recent partnership with the Rapid Group.

“My sister Michelle and I joined Mum and Dad in 2000, shortly after they bought their partners out,” explained Otago Cleaning Supplies manager Nathan de Clifford.

“I for one didn’t think I would ever head down the cleaning supplies road as I was previously an accountant. But I never really enjoyed accounting, which is why, when the opportunity came up to work with Mum and Dad, I said yes. I started at the bottom and worked my way up from there.”

Based in Dunedin, Otago Cleaning Supplies covers a wide-spread territory servicing the lower half of the South Island, from the Timaru area in the north to the Lakes District in the west and Stewart Island in the south.  These areas include numerous hospitality businesses which Otago Cleaning Supplies service with a complete range of guest amenities as well as an extensive range of cleaning supplies, accessories, machinery and equipment.

“Dad recognised an opportunity to get into this market a few years ago. No-one was suppling toiletries and amenities for hotels and motels in the South Island; everyone had to buy it from the North Island. So he jumped at the opportunity with both hands, and now it makes up quite a large part of the business.”

The company is also the Master Distributor for the Silver Lady Miracle Cleaner, with exclusive distribution rights for New Zealand, Australia and the South Pacific.

“The Silver Lady is a non-scratch cleaning pad which we import from England and supply throughout New Zealand. We could see the potential of the product so we put together a TV advertisement, started some co-op promotions, and it took off. Cleaning supplies companies in New Zealand are among our biggest customers”.

Following his parents’ retirement several years ago, Nathan says the company has undergone quite a few significant changes.

“We took the plunge and purchased some land so we could design our own purpose-built premises in 2013. Our previous premise was down by the wharf in the industrial area, so it didn’t have a very good public profile. It was far too small to keep up with customer demand, it was quite hard to find and the parking around the vicinity was very restrictive.

“Our current premise has a much higher profile, with more customer parking and a dedicated inwards outwards goods entrance. We like to think we’re now the best suppliers in this part of the island. There’s no waiting on products to come from the north island, and we offer same day delivery if you live within the region.”

While he admits the first year after the move was a bit tricky, Nathan says overall the decision has paid off for Otago Cleaning Supplies.

“People did struggle to find where we were at first, but once we got that first year out of the way, we haven’t looked back.”

Otago Cleaning Supplies has also managed to almost double its storage space in its facility, by implementing a new raised storage area across half of its warehouse.

“The new storage area has already helped us greatly in regards to meeting customer demand. The health and safety sector has definitely caused a need for better cleaning procedures and techniques which has helped business.

“Our profile has also increased greatly with advertising, with more customers coming to us. And with more business coming through the door, you have to increase the storage to be able to supply those extra customers.”

In July the company joined forces with the Rapid Group to strengthen its overall national business strategy.

“We joined the Rapid Group because we saw it as an opportunity to strengthen our business in the face of our competitors and also give us the ability to apply for national contracts. We’re looking forward to progressing onwards and upwards with the Rapid Group, who engage in a lot of marketing and target national clients.”

Looking to the future, de Clifford says the plan for Otago Cleaning Supplies is to continue on its current path of growth and to start looking into national contracts and government agencies.

This first appeared in the August issue of INCLEAN NZ magazine.