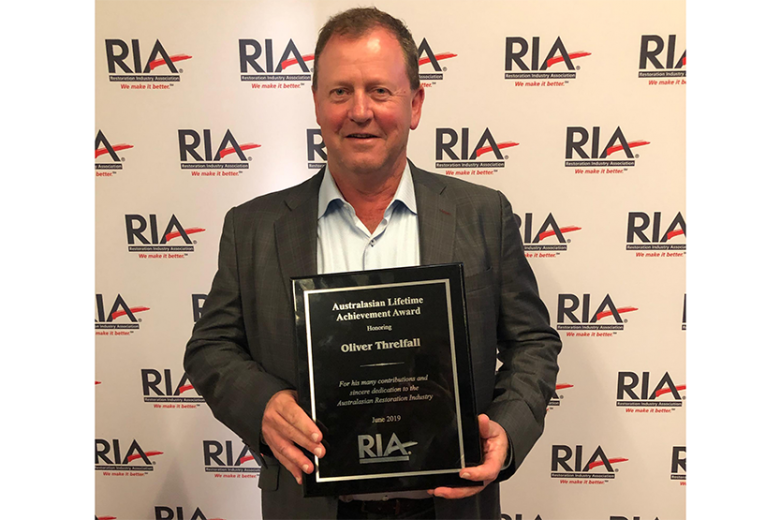 Presented at the Australasian Restoration Conference and Tradeshow in Queensland, RIA Australasian council chairman Owen Boak said the award, now in its second year, recognises service and dedication to the restoration industry.

“Over the past 33 years Oliver has consistently worked both here and internationally to introduce new technologies, foster training and promote the use and acceptance of industry standards whilst also building Australia’s largest restoration group,” Boak said.

“More recently, Oliver was one of the key industry figures involved in the formation of the Australian RIA Council and has accepted the position of chair of our advocacy initiative moving forwards.”

Founded in 1986, Steamatic Australia is a locally-owned and managed franchisee. Since its launch Steamatic has grown to more than 30 locations across Australia and 16 international locations.

Threllfall has also been involved with the association’s local arm since its launch as a steering committee in 2015. In 2017 the RIA approved the formation of an Australasian council.

This award is modelled on the RIA’s international accolade, the Martin L King Award. King spearheaded the Certified Restorer Program, which is widely recognised as the highest international qualification in the industry.

“Oliver has and continues to contribute each and every day to improving the restoration industry and we as an industry chose to bestow our highest honour to him in recognition of this,” Boak said.

It is the second RIA Australasian Lifetime Achievement Award to be presented at the Australasian Restoration Conference and Tradeshow. Last year the inaugural award was presented to Duncan Bennett.